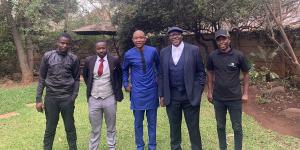 Tendai Biti and 5 other MDC Alliance who were recalled by the rival MDC-T have won their court challenge barely hours before the Nomination Court for by-elections to elect their replacements.

The Zimbabwe Electoral Commission announced that there are no vacancies in the Nkulumane, Mbizo, Kambuzuma, Mutasa South, Pumula and Harare East National Assembly Constituencies constituencies following the court outcome.

The Supreme ruling said MDC Alliance was not a single party but a coalition of 7 parties, and that each party in the coalition, including the PDP, could recall MPs elected on the Alliance ticket.

Commenting on the development, Alex Tawanda Magaisa, a former Chief in the office of a former Prime Minister, the late Morgan Tsvangirai, said the court outcome could be a strategy by the ruling ZANU PF to cause problems in the newly formed Citizens’ Coalition for Change (CCC) led by Nelson Chamisa.

The UK-based law expert said the development doesn’t do CCC any favours at all. Magaisa said:

It is that the 6 MPs will remain in parliament as the PDP element of the old MDC Alliance. Yet, CCC has just launched as a new entity.

He added that it will be awkward for CCC to have members that are also still identified as MDC Alliance or PDP formed by Tendai Biti.

I am still waiting for vybz's response. Asi haana chekutaura?

And you think Chamisa will make your dreams come true...kkkkkkkk...mukai mubike doro

I can't tell you wat it really is i can only tell you what it looks like, magaisa might be right but he is spoon feeding un~thought of information kumadofo... So i can say from the beginning his political expertise is not doing any good for a change but for the worst.

@BUSH LAWYER were u at?🤔

US$4.00 Harare
WaveOfChange 3 months ago