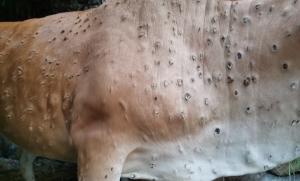 Lumpy skin is a virulent disease spread by mosquitoes, especially during the rainy season. The symptoms include fever, discharge from the eyes and nose, skin lesions, oedema of the limbs, and swollen lymph nodes.

Last year, about 60 cases were detected in Matabeleland North and 400 cattle were affected by the skin disease in the whole of Matabeleland.

We haven’t received any reports concerning the outbreak of lumpy skin disease in Binga yet. Maybe the villagers are yet to report the issue to our department.

But, several villagers in the Tyunga, Njobola, Aiakancele villages under Chief Siamupa told Southern Eye that the affected livestock is dying.

A villager, David Muleya, said the symptoms noted are swollen feet, sometimes from the feet to the knees, white stuff that is produced from the mouths of the beasts, and a rash all over their bodies.

Lovemore Mudenda said farmers have also reported cases of the virus to the animal husbandry staff or Agritex extension officers who have been working with the farmers advising them to buy antibiotics such as procumbent, and penicillin.