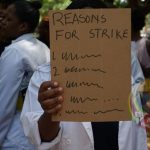 The Health Services Amendment Bill, which will outlaw industrial action by health workers lasting over three days is now before Parliament.

The Bill also proposes to change the name of the Board to the Health Service Commission, a development.

The Bill is now before Parliamentary Legal Committee to establish if its provisions are consistent with the Constitution.

Clause Five of the Bill said health services shall be deemed an essential service as referred to in the Constitution. Reads the Clause:

Any individual who is a member of the governing body of any trade union or representative body of members of the Health Service which incites or organises any job collective action . . . shall be guilty of any an offence and liable to a fine not exceeding level 10 or to imprisonment for a period not exceeding three years or to both such fine and such imprisonment.

Clause Three of the Bill will alter the membership of the Commission so that it will have a maximum of seven and a minimum of four members.

Its chairperson will be the chairperson of the Public Service Commission and the rest will be appointed by the President upon recommendation from the responsible minister.

Clause four of the Bill will put the staff under the control of the Secretary to the Commission, who will not be a member of the new Commission but will sit in on its meetings.

This secretary will have to be a registered medical practitioner.

Busy kungoita ka amendments chazobuda wee hapana,instead of implementing wat people voted for in 2013 constitution,they are busy doing the opposite

Why try to ammend strike & not ammend the salaries & working conditions. Tozviziva kut zvinhu zvakat womei but If the government gives it's workers reasonable salaries they won't strike. ED AMMEND OUR SALARIES NOT LAWS