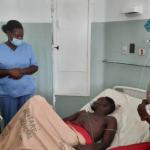 The owner of Beta Bus Company, Muganda, availed more than US$4 000 to Government officials in Mutare to meet medical expenses for people who were injured and those who died when one of his buses was involved in a head-on collision with a truck just outside Mutare on Christmas Eve.

Sixty-eight (68) people survived the crash when a Beta bus collided with a Pathera Logistics fuel tanker before bursting into flames.

However, three (people) died on the spot while two (2) others died after admission at Victoria Chitepo Provincial Hospital.

Mr Muganda handed over US$4 000 to Mutare District Development Co-ordinator, Mr Wilson Boore, in the presence of Secretary for Provincial Affairs and Devolution for Manicaland, Mr Edgars Seenza, to meet medical expenses for the hospitalised as well as food for the deceased’s families and other related expenses. He is also assisting the police to locate his driver.

The driver of the Beta bus has been identified as Philip Chirindo and is on the run.

Meanwhile, the Government, through the Insurance Company of Zimbabwe (ICZ), is meeting the medical expenses for the people who sustained injuries in the accident.

The Government contracted Doves Funeral Services to provide the caskets and hearses for the deceased.

Asst Insp Chinyoka also revealed that a police forensic team had been despatched to the scene and commenced forensic investigations. He said:

The Road Traffic Accident (RTA) verification exercise has revealed that there were 69 people on the Beta bus and two aboard the fuel tanker. Three people died on the spot.

The injured passengers were ferried to Victoria Chitepo Provincial Hospital where two died after admission.

41 were treated and discharged and 25 are still hospitalised, disaggregated as 10 men, 10 women and five children under 12 years.

Beta bus company made a blunder , who actually are they trying to impress or help they should at least think twice there. In my opinion the Beta boss there wants to cover up something. It was stated that only zupco buses are eligible to ferry passengers. Beta iyo.is it under zupco? Mmmmm handizivi kubvunzawo hangu

It's only in urban areas were it was said only Zupco buses can operate. Non-Zupco long distance buses are allowed to operate. Usadzungaire iwe

I think he was supposed to have handed over the money directly to the beneficiaries or the Bereaved families.That was a wrong move,let us wait and see

Taura hako. Handing the money to these greedy gvt officials was a very big mistake, there is nothing that the victims are going to benefit.