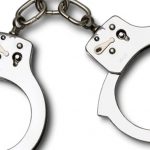 A would-be victim of armed robbery in Beitbridge hit the AK-47-wielding assailant with a car, disabling him until he was arrested.

The suspected armed robber, identified as Obey Mhuru of 3419 Makondo, Chiredzi, is now admitted under police guard at Beitbridge District Hospital after experiencing back, facial and numerous other body injuries.

Nigel Moyo, a resident of the border town, had arrived home when he saw a stranger carrying an AK-47 gun in his yard after midnight last Friday.

Moyo accelerated towards the stranger and hit him with a car, trapping him underneath the vehicle.

A police officer who attended the scene told NewsDay that the assailant was rendered immobile until the police arrived. Said the officer:

He was dragged by the car for about 40-50 metres and was dumped outside the gate.

My brother then went to get the police and upon their return, they found Mhuru lying outside the gate with his gun next to him.

After rendering him immobile, he drove to the police and Mhuru to the hospital.

Mhuru disclosed that he had stolen the gun from a car in Baobab in the town.

Good job. Kuchengetwa uku. These people are merciless. I hope they're just not minor bruises but permanent disability and anovharirwa. Because, type yakadai inogona kudzoka for revenge.

Good job. Kuchengetwa uku. These people are merciless. I hope they're just not minor bruises but permanent disability and anovharirwa. Because, type yakadai inogona kudzoka for revenge.

An incident to learn from...wen you see danger ,face it immediately and you'll conquer... Thank God

Well done .thugs has no place in Zim

He helped his life that was in danger. THANK GOD MR. N.MOYO.
You are lucky. He could have killed you with his AK rifle