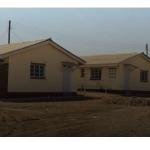 Mnangagwa commissioned 28 government staff houses in the border town, four of which were damaged by strong winds just hours after the ceremony.

It has since emerged that the municipality cut off water supplies to the new houses because it was not clear who was supposed to be billed for the water. Beitbridge mayor Munyaradzi Chitsunge told NewsDay yesterday:

It (water) was closed because there are no names of beneficiaries. If the taps are left open, anyone can access the houses and fetch water. This can then result in disputed bills. Government needs to fast-track allocation of the houses, and once that is done, council will reconnect the water.

Hopefully, the process will be done this week.

It is also not yet clear which government department between the National Housing ministry and the Local Government ministry would allocate the houses to beneficiaries.

One civil servant in the border town said they are at times told to go to the province and sometimes they are referred to Harare.

Some of the residents that have already occupied the houses said it was unfair for the municipality to deny them water because of administration hiccups.

Lack of water and sewage infrastructure delayed the occupation of the houses for more than three years after their completion.

The water and sewage works were only completed after the intervention of former Vice President Kembo Mohadi.

Meanwhile, residents in some sections of Beitbridge have gone for more than three weeks without water after the pipes were damaged during construction works.