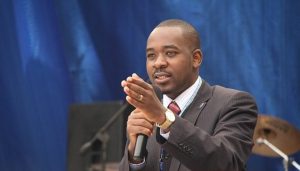 MDC Alliance national spokesperson, advocate Fadzayi Mahere, has said the party deliberated extensively on the need to rebrand following a proclamation by rival MDC-T that “MDC Alliance” is one of its own names and must never be used by any other party. Pindula News presents MDC Alliance’s communique following its national council’s meeting on Saturday:

On the 22nd of January 2022, the National Council of the MDC Alliance met in accordance with the party’s constitution. The National Council received the reports of the President and the Secretary-General. The following matters were deliberated upon:

A. Governance and Human Rights Crisis

1. Economic and political environment – The people’s leadership noted the deteriorating state of the economy which has led to eroded purchasing power for citizens, rising cost of living, a remuneration crisis for civil servants especially teachers and doctors, the breakdown of national infrastructure, the load shedding crisis and the decrepit state of our buses which are leaking from their roofs. We call for the adoption of pro-people policies as set out in detail in our SMART Alternative Policy Framework.

2. Education Crisis: We call for the immediate re-opening of schools with adequate COVID19 safeguards. The right to education must be respected. Education is the bedrock of any successful nation and we remain deeply concerned by the neglect of this critical sector by Mr Mnangagwa ‘s anti-people regime. We stand in firm solidarity with teachers who were arrested for demanding a living wage. Under a People’s Government, the respect of the teaching profession will be restored.

3. Persecution of John Mupanduki: We demand an end to the continued persecution of John Mupanduki who was abducted on the 7′ of January 2022. Despite the fact that he made a police report, no investigations have been conducted by the Zimbabwe Republic Police. Instead, he has been brought before the courts on flimsy, baseless charges. We call for an Independent inquiry into his ordeal and for the criminal charges to be dropped. This pattern of conduct is similar to what we saw with the MDC Trio. There ought to be no space for the abuse of citizens in a constitutional democracy.

B. Zimbabwe Action For Change Agenda 2022

1. Citicens’Action for Change: In line with the tradition of the people’s movement which commenced in 2019, the party sets the agenda for the nation in January of every year. The people’s leadership formally tabled and adopted Agenda 2022 which shall be announced in due course by the People’s President, Adv Nelson Chamisa, in line with our annual tradition. We shall shortly communicate the date and time of this important address.

2. Election Preparedness: The people’s Council received the report of the Election Directorate on voter registration, conditions for free and fair elections and candidate selection processes. The people’s leadership noted that the Zimbabwe Electoral Commission (ZEC) continues to act contrary to its constitutional imperatives to conduct voter registration and to conduct transparent verifiable elections. While the movement has launched an intensive voter registration program in all provinces, we call upon ZEC to ensure more voter registration centres are available. We call for an urgent resolution of the national identity document crisis. The National Council further received a report from the Election Directorate on the progress of the community candidate selection process that is currently underway in all provinces for all wards and constituencies where by-elections shall take place. The people’s leadership emphasized the need to return the citizen to the centre of decision-making at all levels.

3. Action on Reforms: We reiterate our demand for electoral reforms including entrenching the right to vote, particularly the diaspora vote for all citizens. We demand a credible voters’ roll, security of polling material, security of the vote and the voter, establishing transitional mechanisms so that there is a smooth transfer of power pursuant to free and fair elections, the introduction of a credible results management system and media reforms. As highlighted in our PRICE (Principles [or Reliable Inclusive and Credible Elections in Zimbabwe) document, we further call [or the alignment of the Electoral Act to the Constitution, the demilitarization of the ZEC secretariat and a transparent census and delimitation process.

4. Behold the New: There was extensive deliberation on the need to give birth to the new in line with the expectations and clarion call from the citizens. The people’s leadership is charting a new course that will lead to transformation and ethical leadership for the nation.

I ASO NOW TEND TO AGREE WITH SOME OF MY PINDULA.CO.ZW COLLEAGUES THAT MDC ALLIANCE HAS DECIDED TO CHANGE ITS NAME, BUT THERE ARE SHARKS WHICH ARE IN THE CORRIDORS OF POWER WAITING TO SNATCH OR POUNCE ON THEIR NEW NAME.

NAME CHANGE WAS DISCUSSED IN ARTICLE [ B ] [4]. MDC ALLIANCE NATIONAL SPOKESPERSON, FADZAI MAHERE ALMOST SPILT THE BEANS AND NEARLY CONFIRMED THAT MDC ALLIANCE WAS GOING TO ADOPT A NEW NAME.

ENTHUSIASTIC SUPPORTERS HAVE ALREADY COINED SLOGANS/ACCESSORIES SUCH AS "NGAAPINDE HAKE MUKOMANA, CHAMISA CHETE CHETE".THIS IS IN ANTICIPATION OF RECEIVING THE NEWS OF THE NEW NAME.

Uzumba here kikiki kirikiti ki 😆 a lone voice crying in the wilderness, will ever be a opposition victory in your place? I doubt

Kungezi kupi kuri kunzi ngaapinde kuno kumhondoro its us Zanu Pf , Zanu for ever and ever #ED for life

“The voice of the people is the voice of God", A wise man once said it.The people have spoken .

Report Abuse
b 8 months ago

The best news so far. We are waiting for the new brand. Tomhanya nayo. Weldone Advocate. Will stand with you.

ZANU PF wishing you a very good morning to the nameless party!!!!

2022,22 years in the new millenium,the rate of Poverty,unemployment and underdevolopment in Zimbabwe.We are cataliysts of problems,we are suffering and causing SADC countries to suffer.If ZANU pf admits failure,then why do i have vote for them?The violence and riggings manifested greatly this year on ZANU pf, we thought otherwise yester years thinking the opposition were cry babies,but alas even the President pointed out the cheaters amoungst his own party.Plis note that the so called ruling party is terrible divided and it is in shackles.

Election results.ZANU pf will win again using dirty old tricks,but that will not be VICTORY,because the last friend @South Africa will impose some serious policies that will pinch ZANU pf where it hurts(that system has already begun).The SADC will question the outcome results.The Sanctions will be imposed on us by our fellow neighbours,they will close borders.They will encourage a GNU soon after the election results and that will be a cleàr sign of not recognizing the outcome.

The truth behind ZANU pf...many members and locals don't like the party,they use the party for power,greed,to grab resources forcefully and to get away with corrupt activities.Rural folks are severely intimidated,brainwashed and cushioned with little goodies.Urban folks are victimised,encapacitated and brainwashed also.We are ruled under a perfect lie ,made to believe that all is in order while we are burning.Go out of your yard now and take a look at how many Man/Fathers lootering idle outside,Yes they will run and scuttle for that bag of fertilizer or seeds and start selling it for a $1 a cup to feed their starving families and to buy drugs also.