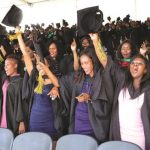 Thousands of Zimbabweans graduated from several local universities in the past few weeks, further swelling the job market with more job seekers.

In a Twitter thread, Chari called on graduates to be “lazy” by finding ways to simplify, automate and manage work timely and efficiently wherever they go. He wrote:

Congrats to all newly minted graduates. Please celebrate this achievement. None but yourself understands what you had to go through to get this far.

A degree is just a certificate to some but to you let it be another brick to solving the world’s problems. If you use what you have learnt to simplify life for yourself and others then you will never be poor. I will explain…

There are folks who used big words and complex terminology to exclude 99% of people from pursuing simple investments in stocks. They wore suits in Wallstreet. Then some young kids with degrees in Mathematics decided that there must be another way. Robinhood was born

Now the world is trading and squeezing hedge funds using the platform without really having to go thru the hoops and knots that used to be there. The 2 young men who started Robinhood are now billionaires. None of them has degrees in finance or economics. Just Physics & Math.

Wherever you are going to end up, be lazy. Find ways to do work better. Hard workers are generally not good at finding solutions because they are not freaked by work. I like lazy people who find ways to simplify, automate and manage work timely & efficiently. BE LAZY but SMART!

The solutions you bring may be frowned on but may become the bedrock for your future profession or company. As a Med Lab Scientist, the worst part of my job was entering results in different systems. I started programming to connect the different machines we had…

I realized I loved it and was good at it. I only used my degree for 5 yrs and have been writing code for 14yrs now. I have started companies with co-workers based on the challenges we encountered which were sometimes viewed as too small to matter by the bigger companies.

In this world, find one thing that you think you are good at, give yourself a title and run with it. You don’t need to be Dr something to be a master. Over the past yrs, we have seen fancy titles that have gone mainstream eg Social Media Expert, Image consultant, SEO guru…

Don’t be afraid to charge for work. If somebody asks you for help with something that requires your skill and time, don’t be afraid to ask for payment. Anything that someone is willing to pay for is a good candidate for a profession or a business.

Don’t wait to be a pro to charge. Start now! This will help you understand the terrain and quickly figure out your worth. The more you get experience, the more you can charge.

Don’t be afraid to try uncharted territories. You may have a degree in English but you can also be a salesperson or a communications expert. Find a territory where you can leverage your degree even if that is not primarily what u learnt.

Keep trying & don’t be afraid to fail. Every job that I have held in the past 10yrs has been a result of the failed projects that I have ventured into. When Cargoove failed a competitor offered me a job at 3x which I made as a co-founder of my failed company.

Finally, the world is not perfect. When you find yourself in hard times don’t be afraid to downgrade. Sometimes we have to do unpleasant jobs just so we can survive and flourish again. Good luck!

True. However, after a while, those who criminalize the idea steal it and legalize it to their advantage.

Thank you for your advise