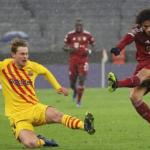 FC Barcelona will play in the Europa Cup for the first time in history following their 3-0 loss at the hands of Bayern Munich on Wednesday night.

Thomas Muller and Leroy Sane, with a fierce 30-yard strike, put Bayern in control before half-time and on their way to securing a 100 per record in Group E.

Jamal Musiala added a third goal just after the hour mark as five-time European champions, Barcelona, were eliminated from the group stages of the Uefa Champions League.

The last time Barcelona lined up at Europa League level was in 2004, when they were coached by Frank Rijkaard.

Barcelona’s demotion to the Europa League was confirmed by Benfica’s 2-0 home victory over Dynamo Kiev.

That meant Benfica finished on eight points, with Barcelona, who only scored twice in the entire group stage, on seven points.

Chelsea were on course for the top spot in Group H when Timo Werner gave them a 3-2 lead in a see-saw contest five minutes from time.

But Magomed Ozdoev’s stoppage-time goal secured a 3-3 draw to leave the door open for Juventus, who beat Malmo 1-0 through Moise Kean’s 18th-minute header.

Mason Greenwood scored an acrobatic stunner for a United side showing 11 changes with top spot in Group F already assured.

Fabian Rieder cancelled that out superbly late in the first half, but Young Boys were unable to claim the win that could have seen them playing European football in the new year.

Atalanta’s game with Villarreal was postponed because of heavy snow in Bergamo.

Lille took the top spot in Group G with a 3-1 win at Wolfsburg.

Sevilla drop down into the Europa League, a competition they have won six times.

After 17yrs of competing in the CL musoro wegudo wachinokoro. Xavi has a huge task at his hands

happy to see barca in Europa.. failure to improve their play relegation is possible