Barcelona Have Signed Aubameyang On A Free Transfer 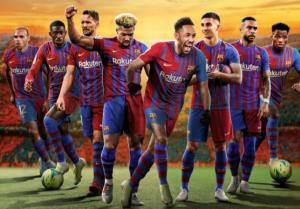 The Gabon international has signed for Barcelona on a free transfer following his departure from Arsenal.

Aubameyang’s contract at Arsenal was terminated by mutual consent on Tuesday, with the 32-year-old having arrived in Spain on deadline day to thrash out terms with Barca.

A potential loan deal was explored first, but the Blaugrana were unable to match Aubameyang’s £340 000-per-week salary and so the Gunners subsequently agreed to let him go as a free agent and sign for the Liga giants on a permanent deal.

Aubameyang trained with the Barca first team ahead of the deal being concluded and the club have now announced his arrival on a three-and-a-half-year contract. A statement on Barcelona’s official website reads:

FC Barcelona and Pierre-Emerick Aubameyang have reached an agreement for the player to join the club after the striker terminated his contract with Arsenal FC.

The player will sign a contract until 30 June 2025 with an option to agree departure on 30 June 2023 and his buy-out clause will be set at 100 million euros.

Shortly the club will provide details of Pierre-Emerick Aubameyang’s presentation as a first-team player.

Aubameyang initially joined Arsenal from Borussia Dortmund for a club-record fee of £56 million ($76m) in January 2018, and went on to score 92 goals in 163 games for the north London outfit.

His final appearance for the Gunners was when he came from the bench in a 2-1 loss to Everton on December 6.

Barca fans will hope that Aubameyang can now rediscover his best form in La Liga as they chase Champions League qualification under Xavi, and he could be in line to make his debut when they take on Atletico Madrid on Sunday.

He saying Silva joined Chelsea for free,is he a spentforce???

Mbappe is also going for free

You should know the circumstances leading to such a situation where aplayer ends up going for free...if you're not well updated,you will just waffle..

US$8.00 Chitungwiza
Sangoma 3 months ago