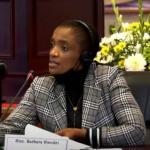 Rwodzi was part of a cast of legislators from Southern Africa who blocked the Pan-African Parliament’s elections in South Africa recently.

The southerners demanded that the presidency be rotated rather than being a preserve for east and west African states.

Rwodzi, who is the Member of Parliament for Chirumhanzu in President Mnangagwa’s home province, Midlands, took centre stage by grabbing the ballot box during the fracas.

Her antics at the PAP conference and her subsequent appointment as a deputy minister did not go unnoticed by Malema. He tweeted:

She deserves to be the president and replace that former self. I know Barbara Rwodzi, you are strong and very passionate about our continent.

Don’t all the ZANU PF misogynists speak down on you and make you feel like you are insignificant; you are better than mediocrity in that space.

We will dearly miss you at Pan African Parliament. Your fearless character inspired all of us who stood on the side of the truth.

You Barbara Rwodzi led us from the front, I hope you will not be replaced with some worthless old fellow. Asante Sana.

That's why Malema will never win elections in his country because he has no brains. Brainless fag