Bank Manager And Workmate Steal US$44 000 From Vault 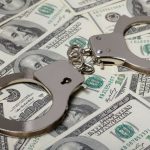 People’s Own Savings Bank (POSB) supervisor and a workmate have been dragged to court for allegedly stealing US$44 112.

Prosecutor Timothy Katsande told the court that the two connived and hatched a plan to steal from their employer.

According to the outline given in the court attended by Chipinge Times, on October 29 at 12pm, Makokowe and Shora were at work and they intercepted the camera footing images of the vault area.

They opened an unlocked vault and took US$ 44 112 from the safe. They then locked the safe and the vault.

Katsande told the court that the two wrapped the money in a khaki envelope and put it in a black bag. The two hid the bag in the teller’s area.

On the same day, Makokowe reported that he lost keys to the vault and safe. He was given a duplicate key. When they opened the safe, they discovered that some money was missing. A Police report was made leading to the arrest of the two.

20k USD will definitely be enough for fines and pension funds.They took their 'investment'