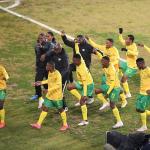 South Africa has suffered a major blow ahead of their two FIFA 2022 World Cup qualifiers against Zimbabwe and Ghana following an injury to Kaizer Chiefs’ Sifiso Hlanti.

Following the news that Hlanti has torn his Achilles tendon and will be sidelined for months, Tercious Malepe from AmaZulu has been called up to fill the void.

In further bad news for Bafana Bafana coach Hugo Broos and fans, Victor Letsoalo is suspended for the Zimbabwe match.

Son of Ramos 6 months ago