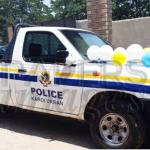 The Business Against Crime Forum of Zimbabwe (BACFOZ) in collaboration with the Hurungwe district crime consultative committee has donated a Nissan NP300 vehicle to the Zimbabwe Republic Police (ZRP) Hurungwe district.

The donation came at a time ZRP is making strides to deliver its mandate in line with the 2021 policing theme ‘ZRP Policing For Economic Recovery And Prosperity In Pursuit of Vision 2030.

The theme resonates with the national vision of being an upper-middle-income economy by the year 2030. The ZRP is, therefore, mandated to create an enabling environment towards realisation of this national vision.

This then calls for concerted efforts by the organisation to ensure the scourge of crime is decisively dealt with. For this to happen, resources such as reliable transport and human resource are needed in the fight.

He added that the donated vehicle will enhance service delivery by improving scene attendance times, and increasing motorised patrols.