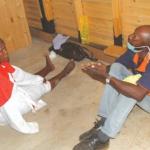 A Chimaninani man is being tormented by what is believed to be the avenging spirit of his uncle who died early this year with bitterness in his heart towards him (the nephew).

Sekuru Christopher Barara, who died at the age of 70, is tormenting his elder brother’s son, Elias Barara, whom he accuses of snubbing his funeral.

Typically, in cases of avenging spirits, the spirit targets the murderer or their immediate family members but in this case, a man who had nothing to do with the deceased’s death is suffering.

After concluding that the misfortune befalling his family was being caused by Sekuru Barara’s spirit, Elias approached Acting Chief Saurombe’s court for recourse. He said:

Ever since my uncle’s death, I have suffered a lot of misfortunes. I am experiencing serious financial challenges.

When one of my brothers sided with me, his son suddenly became sick and the spirit warned him against doing so, lest his son would die.

My own children are always bed-ridden and I beg for the court’s assistance so that I can also lead a normal life.

It reportedly confirmed what Elias had told the court and what shocked everyone is that Madzimai Tembi spoke in what they claimed was the late Sekuru Barara’s voice. Said the spiritualist:

You celebrated my death. You snubbed my funeral even though we were a family and neighbours.

Even after the funeral, you did not even bother to come and throw a stone on my grave. Did you hate me that much?

You labelled me a wizard and did not respect me at all. At one time, you fought with me and choked me.

You went around telling anyone who dared to listen to you that I was a dog. Well, you are now leading the life of a dog.

Poverty and you will be inseparable. You will never fend for your family as I am very bitter with you.

Elias pleaded for forgiveness from his late uncle but his alleged spirit demanded to be given a beast as appeasement before April 2022.

Acting Chief Saurombe advised the Barara family to put their heads together and find an amicable solution to the issue.