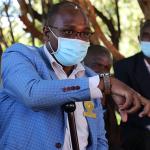 A Nyanga family has sacrificed two girls in a bid to appease an avenging spirit believed to be behind misfortunes and unexplained deaths in the family.

It is alleged that one of the eldest members of the Dzirutsva family of Village 4 under Chief Saunyama’s area, Sekuru Lazarus Dzirutsva committed murder several decades ago.

Sekuru Dzirutsva allegedly killed someone in South Africa in the early 1970s before coming back to Zimbabwe.

When the avenging spirit of the murdered person allegedly started causing mysterious accidents and deaths in the Dzirutsva family, Sekuru Dzirutswa offered his daughter as appeasement for the spirit.

However, Sekuru Dzirutsva later married off his daughter to another man, a development that is believed to have angered the spirit more.

Sekuru Dzirutsva died in the 1990s before settling the matter and years later, the misfortunes bedevilling the family resurfaced.

This prompted Lazarus’ son, Patrick, to appease the same avenging spirit with his own daughter but the problems worsened.

The matter was heard at Acting Chief Saunyama’s court over a week ago as the Dzirutsva family sought a lasting solution to the issue.

A member of the Dzirutsva family was burnt to death after a mysterious fire broke out in a nearby bush and this has been attributed to the avenging spirit.

Meanwhile, the avenging spirit is said to have manifested recently through Patrick’s daughter at acting Chief Saunyama’s Court.

The alleged spirit said it wants two more beasts and a knife from the Dzirutsva family. Said acting Chief Saunyama:

The avenging spirit revealed that it is angered by the Dzirutsva family’s attempts to evade paying full compensation by offering it girls as appeasement.

The spirit said to make matters worse, both girls were later married elsewhere after having been pledged for the spirit.