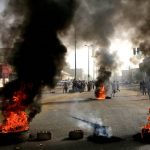 Sudanese security forces shot dead at least 15 people and wounded dozens as thousands took to the streets on Wednesday to demonstrate against an October 25 coup.

The protesters marched across the capital Khartoum and in the cities of Bahri and Omdurman demanding a full handover to civilian authorities and for the leaders of the October 25 coup to be put on trial.

State television said there were injuries among protesters and police.

The Central Committee of Sudanese Doctors, a group aligned with the protest movement said deaths were concentrated in Bahri. They said:

The coup forces used live bullets heavily in different areas of the capital and there are tens of gunshot injuries, some of them in serious condition.

Others carried pictures of people killed in previous protests and of Abdalla Hamdok, the civilian prime minister who was put under house arrest during the coup, with the slogan: “Legitimacy comes from the street, not from the cannons.”

Images of protests in towns including Port Sudan, Kassala, Dongola, Wad Madani and Geneina were posted on social media.

Security forces were heavily deployed on main roads and intersections, and bridges across the River Nile were closed, witnesses said.

The coup ended a transitional partnership between the military and a civilian coalition that helped topple autocrat Omar al-Bashir in 2019.

Despite pressure from Western states, which have suspended economic assistance, efforts at mediation have stalled, with Burhan moving to cement control with help from Bashir-era veterans.