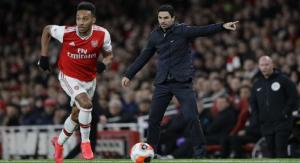 English Premier League side, Arsenal have received an offer from Al-Nassr Football Club, a Saudi Arabian football club based in Riyadh, for Pierre-Emerick Aubameyang to join the club on loan for the remainder of the season.

There is an option to buy for around €7 million. Arsenal are yet to respond.

The Gabon captain who has withdrawn from the delayed 2021 Africa Cup of Nations (AFCON) finals underway in Cameroon has just returned to London where he is scheduled to undergo medical examinations.

Aubameyang, who contracted Covid-19 upon arriving at the tournament in Cameroon this month, was sent home by Gabon last week due to what they described as “cardiac lesions”.

Arteta has said Arsenal have not had “any clarity” from Gabon over the issue and Aubameyang has duly returned to England for testing.

Arteta also stripped Aubameyang of the club captaincy for a series of disciplinary breaches. When he joined Gabon for the AFCON, he was still banished from first-team training amid reports that he might be heading out of the London-based club.