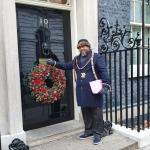 Dethroned Ntabazinduna Chief, Felix Nhlanhlayamangwe Ndiweni (58), said that a warrant for his arrest issued by a court in Bulawayo is “politically motivated.”

Sergeant Canisious Chesango, the officer in charge of Mbembesi Police Station had requested the warrant, accusing Ndiweni of breaching his bail conditions since his release from jail by a High Court judge in August 2019.

However, Ndiweni said he obtained permission from the police to travel to the United Kingdom for eye treatment, waiving a requirement to report once every Friday.

It was the timing of the arrest warrant that raised eyebrows as it came after Ndiweni made a visit to 10 Downing Street in London on 2 December.

The traditional leader handed over a petition to British Prime Minister Boris Johnson asking him to support a campaign by Zimbabweans living abroad to be allowed to vote in elections in 2023.

In a statement on Monday, Chief Ndiweni said the warrant is politically motivated as authorities knew that he was in the United Kingdom. He said:

So after nearly two years of me being in the United Kingdom for treatment, some government political spin doctor suddenly realised that I’m not in Zimbabwe?

The problem for this political spin doctor is that the whole government knew that I was not in Zimbabwe, the police knew and have been working with me the entire time, having allowed me to go for treatment in the United Kingdom in the first place.

By the reaction of the government and their spin doctors, it is evident that they were not pleased that the Zimbabwe Diaspora Vote campaign to give voting rights to 5.5 million plus Zimbabwean citizens in the diaspora has reached this level.

He said he has a chronic eye condition for which he has received treatment at a United Kingdom hospital for the last 20 years.

Chief Ndiweni also said on the day he was convicted and sent to Khami Prison, he had undergone an eye operation. He added:

I explained my condition to my legal team. I showed them the medical referral from the Bulawayo doctor to the hospital in the United Kingdom.

They said that on such medical evidence, I was entitled to medical treatment, even with the bail conditions that were there.

Because the situation was evident and historical, spanning over 20 years, they advised that I should go immediately for the treatment.

When everything was in place for me to go to travel, I signed at the police station and also told them that I was going to the UK for treatment.

The police also had sight of my medical referral and medical papers to that end.

At the police station, there was no electricity or a photocopying machine to copy these documents. The police said they would engage my lawyers.

He said he will return to Zimbabwe once he is discharged from his treatment.

EX CHIEF NDIWENI SHOULD NOT TARNISH THE NAME OT THE ZIMBABWE REPUBLIC POLICE AND THE JUDICIARY FOR NOTHING.

HE COMMITTED THE CRIME FOR WHICH HE WAS SENTENCED TO 2 YEARS IN JAIL WITH LABOUR. HE APPEALED AT THE HIGH COURT AGAINST BOTH CONVICTION AND SENTENCE.

HE APPLIED FOR BAIL AND WAS GRANTED BAIL WITH CERTAIN CONDITIONS ONE OF WHICH WAS THAT HE WAS SUPPOSED TO REPORT TO NTABAZINDUNA POLICE EVERY FRIDAY.

NOW TO TELL US THAT POLICE GAVE HIM PERMISSION TO TRAVEL TO GREAT BRITIAN IS VERY ANNOYING TO THOSE WHO UNDERSTAND A BIT OF THE LAW.

LET ME ALSO BLAME THE POLICE FOR FAILING TO REPORT TO COURT IN DOUBLE QUICK TIME THAT EX CHIEF NDIWENI HAD BROKEN HIS REPORTING TO POLICE CONDITION SO THAT THE COURT COULD HAVE CANCELLED HIS BAIL AND ORDERED HIS ARREST APPROPRIATELY.

YES, THE WARRANT FOR ARREST WAS ISSUED A DAY AFTER EX CHIEF NDIWENI HAD VISITED NUMBER 10 DOWNING STREET TO PETITION BORIS JOHNSON TO SUPPORT DIASPORANS QUEST TO VOTE IN 2023 HARMONISED ELECTIONS. YES, IT IS SUSPICIOUS, BUT IN ALL INTENTS AND PURPOSES, IT DOES NOT EXONERATE HIM FROM ARREST IF HE COMES BACK HOME.

[ MY BROTHER, EX CHIEF NDIWENI, COME BACK HOME AND FACE THE MUSIC. I WILL HELP YOU BY SINGING ALTO WHILE YOU SING BASS ]

'TARNISH THE NAME OT THE ZIMBABWE REPUBLIC POLICE AND THE JUDICIARY FOR NOTHING' my ass....it's already rotten...can't u smell it sonboy?...you of all should smell it

😁😁😁😁😁My brother, come dance to the music Lol

@Ndiweni... just come back and lead from the front Chief. That's all we want not for you to incite people from afar. You're safe in Britain yet you're trying to incite people who don't have as much protection as you have. Come back wena😅😅😅😅