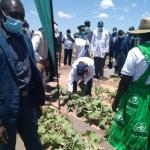 The truck was carrying 25 soldiers when it overturned and rolled over between Plumtree and Makorokoro, a village in Mangwe district close to the border with Botswana. A witness said:

The truck was overloaded. It’s shocking that in this era of Covid-19 they could pack so many people in that truck, yet the government goes around preaching social distancing.

Mnangagwa was in Makorokoro to launch what the state-run ZBC described as the “Matabeleland South market gardening project.”

Mnangagwa toured a vegetable garden and then addressed a rally of hundreds of Zanu PF supporters, many of them bussed in from neighbouring villages and some from as far as Plumtree and Maphisa.

...and another thing that worries me the most is expenditure. It always cost a lot to have a head of state travel like a drunk man who has won a lottery.

Such stories prove how low ED's standards have plunged this country. Being a president no longer holds the same weight and respect it deserved during the Mugabe era

It's very difficult to keep supporting that man without losing your sanity. Only a mentally deranged person or a thief maintains support for such a polarised individual