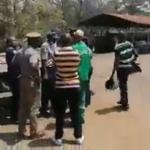 A top Zimbabwe National Army (ZNA) official only identified as Colonel Gwanzura is reportedly behind the eviction of Karoi commercial farmer Garry Hobbs.

Hobbs had close links with the late former President Robert Mugabe and was one of the few white farmers who supported ZANU PF.

Despite having an offer letter, Hobbes and his family on Thursday woke up to a team from the Sheriff’s Office accompanied by armed police officers to enforce the eviction order.

A removal truck was waiting to transport Hobbs’ household furniture, while tractors and other farm implements were removed from the premises.

The farmer was served an eviction order in November last year and an eviction notice came in March this year.

NewsDay reported a senior ZANU PF source speaking on condition that he is not named as saying:

He enjoyed immunity from the chaotic land reform as he was close to Mugabe as he was looking after his (Mugabe’s) in-laws that he supported with all farming expertise.

The publication reported that both Gwanzura and Hobbs could not be reached for comment.

On Friday Information permanent secretary Ndavaningi Mangwana said Hobbs had not been evicted despite the eviction order.

In a tweet, Mangwana said there was a boundary confusion that was being resolved by relevant authorities.

THESE ARE SOME OF THE DOINGS FOR WHICH THE WEST ALLEGE ATHATP ZIMBABWE DOES NOT FOLLOW THE RULE OF LAW.

IF MR HOBBS IS IN POSSESSION OF AN OFFER LETTER, DOES THIS COLONEL WANT TO EVICT HIM FROM THE FARM HE LEGALLY ACQUIRED? HIS OFFENCE IS HE WAS IN GOOD BOOKS WITH THE LATE FORMER PRESIDENT ROBERT GABRIEL MUGABE !!!!! SHAME ON YOU COLONEL GWANZURA.