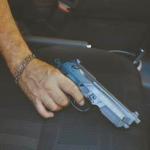 The Zimbabwe Republic Police (ZRP) is investigating a robbery case in which a motorist was robbed of his Honda CRV vehicle by two men he had offered a lift to Southlea Park. Pindula News presents a police statement on the case:

The ZRP is investigating a robbery case that occurred at Marirangwe turn off along Beatrice road, Harare on 13/12/21, where a 48-year-old man lost a Honda CRV vehicle reg number ACV 5783, two cellphones and a wallet containing US$50, after he offered a lift to two men and two women at Boka auction floors on the pretext that they were going to Southlea Park. Anyone with information to contact any nearest Police Station.

Just last week, Pindula News reported on a similar case in which a motorist was robbed of his Toyota Rav 4 by four passengers he picked at Harare Show Grounds on the pretext that they were destined for Kwekwe in the Midlands Province.

Reports of motorists who are being robbed of their vehicles by people they would have offered transport have been on the rise lately which means motorists have to be on high alert.

Reply Report Abuse
Did I 6 months ago

If l see k will call