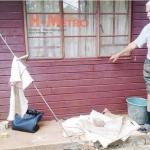 An 86-year-old Vainona domestic worker was found dead in her employer’s backyard cabin on Tuesday.

Margaret Muzanago Sibanda, who has been working for the Berry family for 57 years, was reported to have been denied access to health care and ablution facilities as well as payment for years.

She was found dead by the Berrys’ gardener only identified as Simon clad in her uniforms.

In anger, the Muzanago family dumped her belongings in protest against the alleged abuse of Gogo Margaret under the mercy of her white man Paul Simon Berry.

Reports say Gogo Margaret had one child Christopher Muzanago who also worked as a gardener at Berry’s house in Vainona. He died at the same house in 2012.

The late Gogo Margaret is also said to have refused to remove Christopher’s belongings from the room he used to occupy over unpaid salaries.

Berry told H-Metro that he was not in a position to give his side of the story referring questions to one of his relatives only identified as Mary. Said Berry:

Sorry we are mourning, get in touch with Mary.

Muzanago family spokesperson Leticia Muzanago, 32, narrated to H-Metro the ill-treatment Gogo Margaret underwent as a maid since 1964 when she started working for the Berry family. Said Muzango:

Gogo died a poor person under the roof of a rich family.

She passed on wearing her kitchen uniform in a cabin room located between the two better houses belonging to Berry and his son.

She started working for the Berry family in 1964 in Gweru and when her first employer who happen to be the present Berry’s parents died she was taken to Vainona in Harare in 2008 to work for the son Paul Simon Berry.

Gogo had agreed with her employer that she wanted them to keep her salaries till they buy a house for her.

Paul promised to pay for a Gweru residential stand three years ago but nothing materialized.

She was never taken to medical doctors but had to continue working while sick.

I visited her many times and discover that she no longer had energy to visit a toilet which was some meters away from her cabin.

She had to do a bucket system till her time of death.

When she died they were quick to call a funeral parlour to remove the body without engaging any of us.

When H-Metro visited the house, one Mary was ordering Muzanago to hire a lorry and remove all belongings of Gogo Margaret and that of her late son Christopher Muzanago and take them to their home village in Chirumhanzu.

In an interview, Mary told H-Metro that Margaret was very lucky to have worked for a caring family who would never do anything against her wishes.

She said Margaret refused to go to the doctor so the Berry family always had to organise a house visit which was very costly. She added:

Margaret was well looked after by my partner’s brother Paul.

Paul organised his maid to cook for Margaret every day.

I tried to persuade Margaret to move into a room where her late son Christopher used to stay which was close to the toilet and shower in the staff quarters but she refused.

She said in the room which Margaret rejected, there is her double bed which was given to her by Paul’s mother and a cupboard which belonged to Christopher.

Mary added that when Paul’s mother died she should have gone back to Chilimanzi but she would not go.

H-Metro reports that Mary refused to answer on the salaries issue.

Gogo Margaret’sMargaret’s body was not taken for post-mortem and Covid-19 tests but to a funeral parlour and straight to Chirumhanzu village on Wednesday.

it pains these remaining whites if not all of them had other racial thinking of back to slave trade.Vanoda kusungwa take all their belongings and force march them to the airport.

this has to end, Toti tomhanyiswa kuJoni muno toitwa futi varanda only because we are poor. Let's stand for our selves and deny this. The court must punish this White Family.

white boy ,why are you still hanging around in our country,why can't you follow other baboons which left for europe ,please follow others.

Shame this is sad.
Rest in peace gogo

Domestic worker at 86? Performing which duties. I think she said she would not leave until given her dues, and she got to die with nothing! This is inhumane.

Both sides to blame, relatives could have taken Gogo long back while suing this whatever you want to call him.

This is bad treatment of a human being by another in a country that purports to be majority Christian. Worse still this is not different from the way black pensioners are being treated by pension companies including NSSA, with IPEC's support. Munhu akashandira company 40 years anoisirwa 64 RTGS monthly pension mu Account. Those that were owed money in US$ are given same in RTGS at 1:1. Dindingwe rinonakirwa richakweva rimwe, kana iro rokwehwa roti ngatitambire palawn.

I think white boy is one of the racist who refused to leave our country. Zimbabwe will never be a colony again. Mukosho we white. You are not a human being. You are an animal. You must know that.

We brought civilization to this dark place,you should be grateful lots!!

Iwe white boy. Wakufarisa munyika yedu. Don't forget that we chased away white racists in our country. Infact, they ran away. Is that what you want. You racist of a person. A baboon is better than you. Witch of all witches.

May she rest in peace. Gogo you were brave.

Why didn't you take your baboon relative the moment you discovered that she was suffering?

This family sounds to be hypocritical indeed . If they knew she was suffering . Why not take her . Or do sometn abt it while she lived . Maybe black people will wake up . Whie people look out for their own interests. She was unwise in putting hers in the white men's hands

Iwe how can you compare the President with gogo Margaret. The President can go wherever he wants to be treated in the world except kunyika yaasingadiwe. Kuchembera kuriko asi ko Mugabe akabva ava ne how many years. Don't compare the poor soul with rich and powerful people.