An 8-year-old Baby Struck By Lightning In Lupane 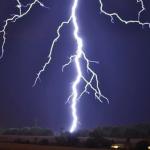 An eight-year-old juvenile died while two others are recovering at Lupane Clinic after they were struck by a bolt of lightning in Lupane last Wednesday.

The Sunday News reports that the three were chopping wood under a tree when tragedy struck.

Matabeleland North police spokesperson Inspector Glory Banda confirmed the tragic incident, saying it was unfortunate that one died while the other two were rushed to Lupane Clinic for treatment. Said Insp Banda:

We received a case where three children were struck by a bolt of lightning in Lupane.

One died and two were rushed to the clinic. The deceased was eight years old.

Police in Matabeleland North said children must not be left alone to wander in the forests or to play near rivers where there are risks of drowning.

The Meteorological Services of Zimbabwe (MSD) recently advised on ways through which members of the public can avoid being struck by lightning.

MSD urged the public to stay indoors or inside a vehicle for at least 30 minutes after the thunderstorms have ended.

Note that lightning can strike from a large distance; thus if you can hear thunder within 30 seconds of seeing lightning, then you are close enough to be struck.