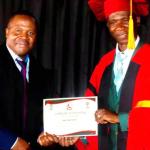 Gospel musician and producer Amos Mahendere says he now has a new title, Evangelist Father Mahendere, which gives him the freedom to minister across various churches.

Mahendere was conferred with certificates in Pastoral Ministry and Counselling last weekend.

Speaking exclusively told H-Metro Entertainment & Lifestyle, the 45-year-old fitness enthusiast said he has offered himself to the interdenominational world. He said:

I have been sitting on this calling to become a pastor and save my Lord for years but there is time for everything.

There are several church elders who have been encouraging me to go to Bible School since the late 90s but I finally made a decision after being convinced by Prophet Makandiwa.

The man of God was open to me when he advised me that I needed to go back to school and I am really enjoying my pastoral studies.

Mahendere, who was part of the Mahendere Brothers gospel group, and composed the popular “Hupenyu Hwepanyika” song, plans to study for a diploma and then for a degree. He said:

After being conferred with those two certificates, I’m not stopping anytime from now.

In January, I will be doing my diploma and then upgrading to degree level.

I have learnt quite a lot as a preacher and I am now willing to save the Lord with distinction after being empowered at school.

There are so many things that we have been doing wrong because I was in the dark but I am happy that I am now teaching people something that I understand better.

Amos said he is the first sibling in his family to be conferred with the certificate in Pastoral Ministry.

His two young brothers, Michael and Misheck, are also doing well, he said.

Michael has since established himself at UFI, the megachurch founded by Emmanuel Makandiwa while Misheck is based in Thohoyandou in Limpopo, South Africa.

1John 2:27 "..But the annointing which you have received of him abides within you, and you need not be taught by any man...the same annointing teaches you many things, and is truth...".

If I get you correct then there's no reason why any Christian should listen to anyone at all. Because, the anointing will teach us all things. No need for gathering or fellowship. Every man for himself with the anointing🙄
Why then does the Bible talk of TEACHERS, APOSTLES, EVANGELISTS, PASTORS AND PROPHETS AS GIFTS TO THE CHURCH.

US$0 Harare
Conquring. 5 months ago