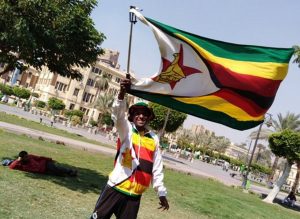 Prominent Warriors and Dynamos fan Alvin “Aluvah” Zhakata has been discharged from a Cameroonian hospital where he had been admitted after he collapsed after the Malawi and Morocco Round of 16 2021 AFCON match last month.

In a post on Twitter on Wednesday, Zhakata said he is supposed to undergo open-heart surgery (coronary artery bypass) in China in June this year. He said:

Discharged from hospital. This gent to have open heart surgery (coronary artery bypass) in China, in June 2022, God willing.

That’s the summary! Thank you all for your thoughts, prayers and well wishes.

The president of the Cameroonian Football Federation, Samuel Eto’o reportedly chipped in to assist after it emerged that Zhakata could not afford the expenses to allow further medical tests to be conducted on him.

Some African journalists in Cameroon had led a campaign to have CAF help out Aluvha but to no avail.

Zhakata became famous when he travelled from Cape Town to Cairo by road to watch the 2019 AFCON finals in Egypt.

However, Msila eventually aborted the journey before they had reached Sudan.

Sure someone ngaatijekesere, this is too much 🙆🏽‍♂️