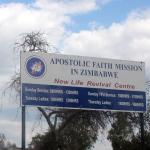 An Apostolic Faith Mission (AFM) in Zimbabwe pastor aligned to the Cossam Chiangwa faction, Panganai Makarichi, has won a High Court case where he was being sued by the Amon Madawo-led group for refusing to surrender a church vehicle.

Makarichi was expelled from the church following accusations of plotting a coup against Madawo, who was declared the legitimate leader of the church recently by the Supreme Court following an acrimonious split of one of Zimbabwe’s largest and oldest pentecostal churches.

In his application, Madawo had also sought to evict Makarichi from the church premises.

On Tuesday, High Court judge Justice Jacob Mafusire ruled in favour of Makarichi following a default judgment after Madawo’s faction failed to oppose his application for a declarator on time.

Justice Mafusire said Makarichi had been declared the legal owner of an Isuzu KB 330 double-cab vehicle.

However, the Madawo camp, through its elder Freddie Kabungaidze of Living Word Tabernacle Assembly, said it would appeal the High Court judgment.

Kabungaidze said the order was granted due to a technicality in favour of Makarichi. Said Kabungaidze:

Respondent is not entitled to the declarator that he seeks in his application.

Makarichi argued that he had sold his personal car to secure a deposit for the Isuzu truck.

He also argued that AFM Zimbabwe owed him outstanding salaries, adding that there was a standing resolution to give him the vehicle.

The battle to control AFM started in 2018 and has played out in the public for the past three years.

It resulted in the emergence of two rival camps, one led by Madawo and the other by Chiangwa.

The dispute between the two camps spilt into the Supreme Court after a group led by Chiangwa filed an appeal against a High Court order which gave Madawo’s faction blessings to lead the church.

The row over control of the church and its assets was sparked by the church’s council meeting held at Rufaro, Masvingo in 2018.

The meeting, as part of its resolutions, passed a vote of no confidence on the president of the church Reverend Aspher Madziyire.

The results of the council meeting saw leaders of both factions taking the matter to court.

THE PROBLEM OF LEADERSHIP INHERITANCE IS COMMON IN MOST PENTECOSTAL CHURCHES. THEY HAVE COUNCIL OF ELDERS WHO SIT TO CHOOSE A SUCCESSOR, BUT WHEN THE CHANCE COMES, EITHER SON, WIFE OR A CLOSE RELATIVE SUPPER IMPOSE HIMSELF/HERSELF TO LEAD THE CHURCH, LOOK AT WHAT IS HAPPENING IN MWAZHA'S CHURCH, SCOAN CHURCH (TB JOSHUA) WHERE HIS WIFE TOOK OVER LEADERSHIP OF THE CHURCH.

THESE CHURCHES GENERATE MONEY. WIFE, SON OR CLOSE RELATIVE CAN NOT WATCH WITHOUT A FIGHT SOMEONE TAKING OVER THE THE WEALTH. THEY OPERATE LIKE BUSINESS ENTITIES, WITH CHARITY WORK HERE AND THERE TO MASK THEIR REAL PURPOSES.

BE COMPLETELY HUMBLE AND GENTLE; BE PATIENT, BEARING WITH ONE ANOTHER IN LOVE. [EPHESIANS 4:2]

Jews vakaramba Jeso buh havasi vakamuhuraya it's Romans..e same Romans who bribed Judas Iscariot to shw them Jesus...after Jesus was arrested,Peter followed distantly..Peter at e court of Romans, tried to hide that he was a Jew n that he was with e Jesus...buh e Romans could hear his ascent frm theirs...e Romans were always going to church on Sunday...they continued fighting Christian's until it was agreed that they can unite with them and Christian's shld also go to church on Sunday..e Roman once called Christian Church buh changed it Universal church(Catholic)

US$20.00 Harare
CzaryMangule 6 months ago