AFCON: Zimbabwe Warriors Lose To Senegal In Their Opening Match 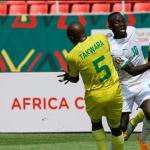 Zimbabwe lost its 2022 Africa Cup of Nations (AFCON) finals opening match to Senegal by a goal to nil.

Sadio Mane’s injury-time penalty was enough to sink the Warriors that had fought for 90+4 minutes to keep the Lions of Teranga at bay.

It was Madzongwe’s last-minute that saw the referee pointing at the spot-kick.

The Warrior protested the decision but the referee was adamant that it was a handball and if Madzongwe was not satisfied, “he should go to the Video Assistant Referee (VAR) monitors” and check for himself.

The Liverpool striker sent the Warriors goalie, Petros Mhare, in the wrong direction while he joined his teammates to celebrate the hard-won three points.

Odds were against Zimbabwe considering the calibre of Senegal players. Senegal who lost the 2019 AFCON final to Algeria had players like Sadio Mane and Gana who play for Liverpool and Paris Saint Germain, respectively, the best teams in the World.

Zimbabwe will play Malawi next and will be hoping to get all three points to enhance their chances of progressing from the group stages.

In all its previous attempts, Zimbabwe has never gone yonder the group stages.

Zim have got quality l have been opposing it I have no doubt ,even when when Brazil is to play France ,one team may progress that does not not necessarily mean to say they are both good sides

Senegal is one of the super teams in Africa compared to ours, but the Worriors managed to hold it for 94mins. What an excellent performance. The lose is just unfortunate witnessed by everyone. Mistakes are there, and everybody makes them. Don't lose hope it's your first match. Just soldier on guys. 2022 is our year,and is different from previous years. History is history. U are going to make it. Go Worriors Go. I support u guys till the end nomatter what.

US$0 Harare
Warrior 4 months ago

Supporting Warriors??? I don't support ...I enjoy when they lose.,.

Malawi vs Guinea which team won?

The team played well and deserved even 3 points from the match.So heartbreaking for us to fail to defend the last 30 seconds of the match.
Last afcon edition we lost 1 nil to hosts egypt on our opening match.Like today the performance was encouraging only to go on and play some of our worst matches against uganda and DRCongo.
We will need to gather ourselves up , take on malawi with the same energy we displayed today, I'm sure 3 points will be there to grab.
At least this time we are not hearing problems of unpaid fees, so I hope this SRC team will do us proud and prove who was messing with zims football

Manje Marawi inosvasvanga.. just like egypty, Senegari were putting less effort,as they were reserving energy for serious matches in the knockout stage

We need some post match ANALYSIS FROM THE BUSH LAWYER

Report Abuse
Stranger From the Forest 4 months ago

We need some post match ANALYSIS FROM THE BUSH LAWYER

Stop supporting football if u r not into it man .it was a grt performance from the warriors,there were juc unlucky by losing

Well tried Warriors.... Be more focused next time... I will bring you Juju from Ndunge for your next clash kkkkkkk