AFCON: Vincent Aboubakar Is The 1st Player To Score 8 Goals In 48 Years 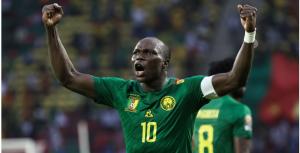 Cameroon skipper Vincent Aboubakar has scored eight at the delayed 2021 Africa Cup of Nations AFCON) finals played in Cameroon to become the first player to achieve that in 48 years.

Aboubakar netted twice as Cameroon came from three goals down to draw 3-3 with Burkina Faso in the 3rd/4th play-off match on Saturday.

The match was settled on penalties with Cameroon beating Burkina Faso 5-3, with Aboubakar netting the winning spot-kick.

Cameroon looked dead and buried until the 85th minute when Aboubakar made it 3-2 with a towering header from inside the Burkina Faso box.

That was Aboubakar’s seventh goal in a single AFCON tournament, equaling McCarthy’s record set at the 1998 edition in Burkina Faso.

Aboubakar would complete his brace two minutes later for his eighth goal at this year’s AFCON tournament to become the first player to achieve that in 48 years.

No African player had scored more than five goals in a single AFCON tournament since the late 1990s, and Aboubakar’s name will forever be remembered.

The 30-year-old is now a goal shy of Congo DR legend Ndaye Mulamba who netted nine goals in a single AFCON tournament during the 1974 edition.

good performance by Vincent..what makes his 8 goals special is that he scored while there's VAR..

Reply Report Abuse
Leader of the youths (jnr) 3 months ago

At what is the final game between Egypt and Senegal

That's hard work and determination, he's a man of purpose.Congrats

good stride VA but it wld have made a better honour for if you had managed to get to the final and even best if you had won the trophy and scored in the final match, So guys who is the all time afcon scorer now