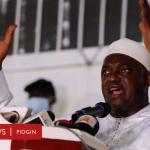 Adama Barrow has been re-elected The Gambia’s president after he garnered 53 per cent of the vote, with his closest challenger Ousainou Darboe getting 27.7 per cent.

Saturday’s vote was the first in The Gambia since longtime ruler Yahya Jammeh was forced into exile in January 2017 after he lost to Barrow, relatively unknown at the time.

Jammeh was forced into exile in Equatorial Guinea after military forces from other west African states forced him out of power following his electoral loss to Barrow in 2016. He had refused to relinquish power despite his loss.

Addressing his supporters in the capital Banjul following his victory, Barrow called for tolerance and respect for opponents. He said:

I will do all I can and utilise every resource at my disposal to make The Gambia a better place for us all.

Meanwhile, before the full results were announced, three of Barrow’s rivals had rejected partial results. Darboe and two other candidates said in a joint statement earlier:

At this stage, we reject the results announced so far. All actions are on the table.

Nearly one million people out of a 2.5 million population are registered to vote and voter turnout was at 87 per cent, according to official results.

I'm looking for a room to rent in Bulawayo . Location:Nketa ,Nkulumane and Pumula it's urgent guys help me before 11 Dec even after bcz I don't have choice.🙏🙏