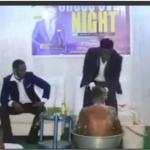 A man who is said to be a ‘pastor’ from the viral video where he was seen bathing female ‘congregants’  has said the video was an acting scene, not a real service.

The man named Aniefiok Udoabasi posted on Facebook saying he is actually an actor.

Nobelie.com reports that Udoabasi’s stage name is pastor Blinks and he usually makes skits and short films about churches and other things that generate clicks.

In the video which had taken over the internet, some young ladies can be seen taking turns to get bathed by the pastor in the full view of everyone.

The video and pictures left many baffled. Commenting on the video some social media users bemoaned some women’s desperation.

Some observers, however, came to the pastor’s defence arguing that the pastor did not force anyone as such the women in the video did so willingly.

The internet is awash with videos of clergymen doing all sorts of things on congregants in the name of casting bad luck or cleansing them.

Mumazuva ekupedzisira hazvishamise izvo..for the son of man is about to come a lot shall happen first...I urge u pastor watsover repent now for the hour is at hand🔥🔥🔥