Aaron Ramsey: What are Rangers getting in Wales and Juventus midfielder? 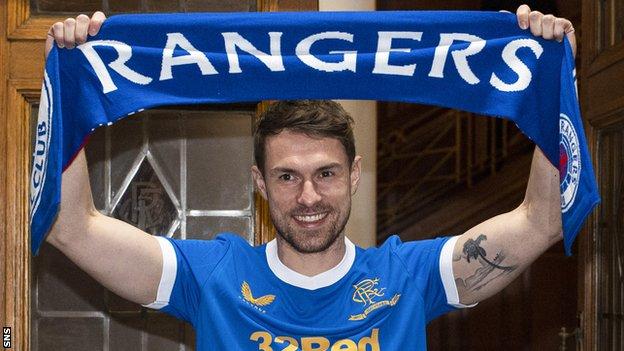 Not since Paul Gascoigne swapped Lazio for Rangers in 1995 has an arrival from Serie A to Scottish football caused such a stir.

Aaron Ramsey's loan move to Rangers from Juventus on Monday - hours before the transfer window closed - was a remarkable coup that made ripples throughout the football world.

But what are Rangers getting in the 31-year-old who comes to Ibrox looking to reignite his club career?

Rangers have completed one of the biggest Scottish deals of this or any other decade by enticing supremely talented attacking midfielder Ramsey to Ibrox.

The Wales international built a reputation as a world-class talent in 11 years with Arsenal, where Arsene Wenger hailed him as the "complete midfielder". Technique, vision, passing and incisive runs were all key facets of his game, contributing to his attacking effectiveness that yielded 65 goals in 371 games.

However, Ramsey's injury-dogged spell in Italy poses questions over his robustness for the rigours of a fight on three fronts in Scotland.

Having won three FA Cups with Arsenal, scoring the winner in the 2015 and 2017 finals, he joined then Italian champions Juventus on a four-year deal in summer 2019.

The Serie title was secured in his debut year, and the Coppa Italia followed the next season, but his overall impact has fallen short of a player earning a reported £400,000 per week.

Ramsey has played 70 times for Juventus in two and a half seasons, scoring six goals. Of his 49 Serie A appearances, 25 were starts and he completed 90 minutes just once.

He has never played back-to-back games in full for Juventus where, according to Transfermarkt, he has missed at least 34 matches through 13 separate injury issues.

This season, following Massimiliano Allegri's return as coach last summer, Ramsey has dropped out of the first-team picture. His only start came in August, with the last of his subsequent four outings a six-minute outing off the bench in a Champions League win at Zenit on 20 October.

At age 31, how much of a toll has his succession of injuries taken?

Despite his mixed fortunes in Italy, Ramsey has remained a key - and often talismanic - figure for Wales.

He started all four games at Euro 2020 last summer, scoring the opener against Turkey in Wales' sole victory as they progressed to the last 16.

Since then, he started four of six World Cup qualifiers - scoring three times - as Rob Page's men clinched a play-off semi-final against Austria in March. Win that and Ramsey could be facing Scotland in the final four days later.

In 71 caps, Ramsey has 20 goals, and is celebrated by Wales fans as a national hero of the same standing as Gareth Bale.

Former Wales team-mate Robbie Earnshaw, who played with Ramsey in the national team, says the player still has plenty to offer and will thrive in the pressurised Old Firm environment.

"I'm very surprised he has joined Rangers over Premier League sides," Earnshaw told BBC Scotland. "He is an incredible player who can play at the top, top level.

"It's a great move for him because Rangers are a huge club and are getting a guy who is always motivated. He's going to help that dressing room, help the people around him. So he is very unselfish in how he works and how he plays football.

"He knows the kind of pressure that comes with winning a top-level title, he won't be phased by any situation.

"He's influential and his performances over the last few years for Wales show he's still consistent in making a big impact. Most, if not all, of his goals are big ones. They're winning goals, they change the course of a game. That's how important he is."

Manager Giovanni van Bronckhorst has said he will resist the temptation to throw Ramsey straight in for a debut in Wednesday's derby at Celtic as Rangers attempt to stay top of the table.

That makes Sunday's visit of third-place Hearts the likely stage for Rangers fans to get a first glimpse of the midfielder in action.

He is the second eye-catching arrival at Ibrox in recent days, following the loan acquisition of £19m Ivorian winger Amad Diallo from Manchester United, as Van Bronckhorst strengthens his attacking options.

Rangers have reportedly paid a £2m loan fee for Ramsey's four-month stint, but it is a calculated gamble with the winners of this season's Premiership likely gaining direct entry to the Champions League group stage and a guaranteed £30m windwall.

While the club may have to carefully manage his fitness, Ramsey in full flow is a tantalising prospect.

The player himself is enthused by the chance to relaunch his career at a "massive" club who face German giants Borussia Dortmund later this month for a place in the Europa League knockout stage.

"I've heard so much about this club," Ramsey told RangersTV. "To actually be here and experience it for the first time, I'm really excited to be a part of that.

"It's a possession-based team that plays the way I like to play as well. There are many benefits to being here - European football and to experience a couple of the Old Firm games.

"The last couple of years have been a bit difficult at times but for me now it's about looking forward, pulling on that blue jersey and hopefully showing what I can do."

All the best Camarada Aaron,you got what it takes to uplift the Old firm... let's hope injuries won't overshadow your loan move.

Pindula woyee!
Football has never been the same here! Hope you continue this wonderful coverage of European football.