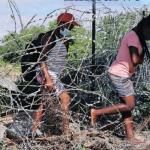 The report, titled Labour Market Diagnostic Analysis (LMDA), states that the number does not consider net migration, which has been negative, with numerous workers leaving the country in search of better work opportunities in neighbouring countries and further afield. The report says:

It is estimated that in 2020, net migration the number of immigrants minus the number of emigrants was close to 580 000 people. Although there is no accurate data on the number of the working-age population, leaving the country to work abroad.

The most recent study suggests that 72% of outgoing migrants fall in the 20 to 34 years age group. In addition, 40% were women and 73% completed secondary education.

The majority of emigrants cited a lack of employment opportunities as the major reason for leaving the country. Most worked in the agricultural sector before their departure. South Africa was the leading destination chosen by emigrants, followed by Botswana.

Unfortunately, due to their irregular status, most Zimbabwean emigrants appear to occupy low-quality jobs characterised by the absence of employment contracts and social protection.

The report observes that other things being equal, women and young workers are four times more likely to be inactive than men and adult workers respectively.

Youth who enter the labour market may also face additional barriers to finding a job, partly due to a lack of work experience, difficulties signalling their skills to employers, fewer opportunities to access capital and lower levels of social capital.

Really saddening and it demonstrates that the regime is lying on the state of the economy.The so called 2nd Republic is boosting of economic growth.The reality on the ground shows otherwise.