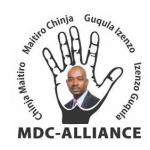 About 50 MDC Alliance supporters were reportedly arrested while several others were injured when police disrupted a party gathering in Mabvuku on Sunday.

In a statement, the MDC Alliance said those who were arrested were detained at Mabvuku Police Station. The party said:

This afternoon, [police] violently disrupted our Anniversary celebrations in Mabvuku. More than 50 were arrested and detained at Mabvuku Police Station. Several members and supporters have been badly injured.

In a tweet, MDC Alliance secretary-general Chalton Hwende also confirmed the arrests and condemned President Emmerson Mnangagwa for allegedly treating the opposition party as if it was a banned organisation. Said Hwende:

Police @PoliceZimbabwe has violently disrupted our meeting in Mabvuku and arrested our supporters. The MDC Alliance is now been treated as a banned Political Party. @edmnangagwa is a scared man he is afraid of the defeat that is visiting him soon. We must not be deterred.

This afternoon, @PoliceZimbabwe violently disrupted our Anniversary celebrations in Mabvuku. More than 50 were arrested and detained at Mabvuku Police Station. Several members and supporters have been badly injured. pic.twitter.com/x7EWr7U001

The party said the arrests clearly illustrates the decaying public space in Zimbabwe and shows that the electoral playing field is uneven.

Why does ZRP keep maintaining tactics that were used by Ian Smith to oppress people of color. It's as though Zimbabwe neva progressed politically after 40 years of independence. Let the opposition exist undisturbed, this is why sanctions keep being renewed every year, we need a professional police service, not a force. #notozimpolicebrutality

US$8.00 Chitungwiza
Mr Bush 6 months ago

So when are u going to stop arresting opposition u police

Poor ZANU pf will continue spoiling its image in the face of the international community.
MDC A let them beat you,maime or arrest your supporters,but as for you continue advocating for extension of sanctions and more serious sanctions as long there are no political reforms.
Dirai jhecha!!!!
#ngaapinde hake mukomana.