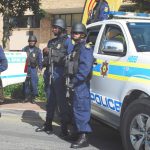 Three Zimbabwean nationals carrying explosives have been intercepted by members of the South African National Defence Force (SANDF) in Musina.

The explosives consisted of six reels of detonating cord, 50 units of connector capped fuses and 65 units of blasting cartridges, all valued at around R38 000.

Semono said the three undocumented suspects aged between 31 and 33-years-old were intercepted at the Beitbridge port of entry. He said:

The suspects were handed over to the South African Police Services (SAPS) bomb disposal unit in Musina.

Upon arrival at the police station, the suspects’ luggage was searched and commercial explosives were discovered.

The trio will appear before the Musina Magistrate’s Court with charges of unlawful possession and the smuggling of explosives.