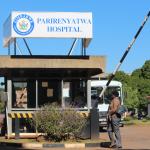 Three members of the same family were hit by a car at a church prayer meeting in Harare along High Glen Road.

A man from Marimba in Harare, his wife and child are said to have been the only people hit by a drunk driver on a Saturday night just over a week ago.

According to H-Metro, Molver Chigwada, 47, his wife Loveness Chigwada, 42, and son Ben Chigwada, 5, were all hit by a car registration (ABV 5164) during a prayer meeting.

Family spokesperson Walter Tinashe Chigwada told the publication that Molver was admitted to the intensive care unit at Parirenyatwa Group of Hospitals while Loveness and Ben were treated and discharged. Said Chigwada:

The mishap happened when the three were among worshippers at a church along High Glen Road.

It is disturbing to learn that our relatives were the only ones hit and the driver was reported to have been drunk.