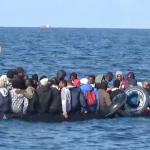 More than 27 people including a young girl drowned on Wednesday while trying to cross the Channel to the UK from France when their boat capsized.

Two survivors were in intensive care as of yesterday while French police arrested four people near the Belgian border suspected of being linked to the drownings.

The International Organization for Migration (IOM) said it was the biggest single loss of life in the Channel since it began collecting data in 2014.

Speaking at an impromptu news conference in Calais following the tragedy, French interior minister, Gérald Darmanin, said that the dead included five women and a girl.

Darmanin also said two people were rescued and one was missing. It was earlier reported 31 people had died, but the total was revised down to 27 overnight on Thursday.

He said the boat that sank had been “very frail”, and compared it to “a pool you blow up in your garden”.

French authorities had, however, not ascertained what country the victims originally came from.

British Prime Minister Boris Johnson who held a Cobra meeting on Wednesday to discuss the incident said he was “appalled” by the tragedy.

Johnson suggested the French government was culpable for the tragedy saying Paris had not always approached the problem of the crossings “in a way we think the situation deserves.”

The UK government has pledged to give France €62.7 million (£54 million) during 2021-22 to help increase police patrols along its coastline, boost aerial surveillance and increase security infrastructure at ports.

This is expected to help the French clamp down on illegal migration across the English Channel.