2023 Elections Can't Be Cancelled Without Amending The Constitution - Prof Moyo 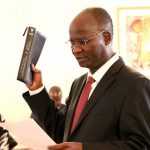 Exiled former minister of Information, Publicity and Broadcasting Services, Professor Jonathan Moyo has said elections scheduled to be held in 2023 cannot be cancelled without amending the national constitution.

Moyo’s reasoning is in resonance with those of the Election Resource Centre (ERC), an election watchdog, which early this month said the cancellation of both by-elections and the 2023 elections was dangerous to constitutionalism and democracy in the country. Moyo said:

ELECTIONS MUST NEVER BE CANCELED. It’s a terrible thing to contemplate or do in a constitutional democracy. Those who genuinely want a GNU, for whatever reasons, must get it through an election either as a product of a pre-election pact or a result of an inconclusive election!

His remarks come amid reports that opposition MDC-T led by Douglas Mwonzora approached President Emmerson Mnangagwa proposing that both the pending by-elections and the 2023 elections be postponed.

The party reasoned that polls were a waste of time and resources given that the requisite political reforms are yet to be implemented.

MDC-T is pushing for dialogue which could possibly result in the formation of a government of national unity saying that approach will result in nation-building by easing rising tensions between the government on one hand and the opposition and the citizenry on the other.

Meanwhile, ZANU PF and opposition MDC Alliance led by Nelson Chamisa are preparing for the elections.

Advice from a 'think tank' or 'stink tank

We are stuck with the devil
ZANU-PF is the law

Izvi zvinotaurwa naJona zvinotaurwa zvinoburitsa pachena kuti zanu pf inomanikidza zvinhu that's why it refuses to stepdown when loosing elections , abducts ,kill , torture, implement the Constitution without consult citizens , forcing people to love it vanaJona vaakurwadziva nezvevakagadzira so all people who pretend as zanu pfs are not they only fear to tell the truth

LET US NOT FORGET THAT MDC T IS A SURROGATE OF ZANU PF. MWONZORA WILL FOR HIS SUPER ORDER HIS PARLIAMENTARIANS TO VOTE WITH ZANU PF. SO FAR MWONZORA HAS DONE IT BEFORE THIS YEAR. HIS MPS VOTED WITH ZANU PF TO AMEND THE CONSTITUTION.

MWONZORA WANTS TO AVOID ELECTIONS AT ALL COST BECAUSE HE KNOWS THAT HE WILL NOT WIN IF HE GOES TO ELECTIONS. I DO NOT THINK THAT PRESIDENT MNANGAGWA WILL AGREE TO SUCH A FOOLISH ACT WHICH WILL INVITE MORE CONDEMNATION BY THE INTERNATIONAL COMMUNITY.