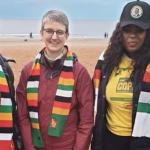 Maggie Chapman, a Zimbabwean-born Scottish Green MSP for North East Scotland has said the positive changes that are coming from COP26 do not go anywhere near far enough considering that 150,000 people are dying every year from causes relating to climatic change.

Chapman says the lobbyists did not travel because they want to stop the climate crisis, but because “they know that any meaningful change will impact their profits.” She added:

For many people climate change is not a threat they are trying to avert, it is a crisis they are already living through.

Many are already feeling a devastating impact, with analysis from the World Health Organisation showing that 150,000 people are dying every year from causes relating to climatic change.

Governments in the North need to be supporting those that are suffering as a result of our many years of runaway carbon emissions and exploitation of resources.

The 2009 Cop conference committed $100 billion of funding from the global North to the South for adaptation and to mitigate the impact of climate change.

This may sound great, but less than a quarter of it has actually been delivered. And it is but a drop in the ocean of what is needed for mitigation and adaptation.

She added that COP26 must not be an end in itself. Chapman said the world must not be comfortable with limited reforms that have been agreed upon.

A fairer, greener world is possible, but it will take a lot more than warm words and hot air.

More frequent and intense drought, storms, heatwaves, rising sea levels, melting glaciers and warming oceans are some of the effects of climate change experienced, especially by the global South, in recent years.