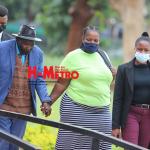 A traditional healer, supposedly aged 106, on Monday, appeared in court for extortion involving a late businesswoman he allegedly helped to amass wealth.

He had allegedly threatened the family of the late businesswoman, Precious Nyakujara, with death if they did not return the goblins he claimed to have given the now deceased.

Precious, who was well-known in Harare as a foreign currency dealer, died in August 2021.

Zinyemba appeared in court together with his daughter Pamela Zinyemba and his nephew Newlife Magona.

State prosecutor Marian Furidze told the court that in November last year, the trio, with Artwell Magona and Elton Dickson connived and wrote a letter which they addressed to the late businesswoman.

The letter was delivered to the late Nyakujara’s residence in Glen Lorne by Magona and was received by her husband John Mukorera.

Mukorera reportedly advised his mother-in-law Josephine Edith Nyakujara of the contents of the letter which purported to invite his late wife to Zinyemba’s shrine.

On 24 November last year, Mukorera and his mother-in-law and his cousin Brian Goto went to Zinyemba’s shrine in Musekiwa village in Bindura escorted by Magona.

Zinyemba allegedly informed them that he had given the late Precious some goblins, which had helped her succeed in her business.

He further told them that since Precious had died and no one was there to take care of the goblins, it was safe that he repossessed them because they wanted blood.

Zinyemba reportedly claimed that he had an agreement with Precious that whenever the goblins were to be returned, they were to be accompanied by a payment of 40 cattle, a house in Harare and a car.

After Josephine allegedly begged for leniency, Zinyemba reviewed the payment downwards to US$5 000 and a motor vehicle.

Zinyemba reportedly sent two representatives with Josephine to Precious’ house and performed some rituals to remove the goblins.

After the rituals were done, Josephine allegedly paid them US$7 000 in the presence of her son-in-law Mukorera and Goto.

Meanwhile, Josephine later informed her uncle Douglas Chiendambuya what had transpired and they agreed to meet at a local hotel.

At that meeting, Chiendambuya was accompanied by Justice Muzungu who revealed that he had been treated in the same way by Zinyemba after his father died but had refused to make the payment after noting “inconsistencies”.

Josephine then decided to make a police report for extortion, resulting in the arrest of Zinyemba and his alleged accomplices. They were remanded to 20 January.

Ndoda kukabhadharira bail ka kule aka. I think I and others need his sevices kuti tingagarewo ku Glen Lorne.